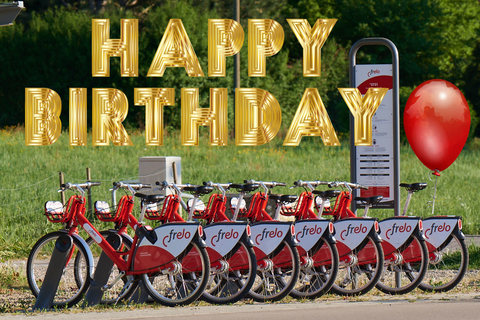 Frelo Freiburg celebrates its first birthday today and can look back on a great year:

Since the system has been so well received, there is nothing to stop it from being expanded. Up to 20 stations will be added in the city area over the summer months. From June onwards, there will gradually be test stations in Munzingen, Tiengen, Opfingen, St. Nikolaus, Waltershofen and Hochdorf, and after its reopening, also at the thermal spa, with temporary signs and markings. If the stations are well received, they will become permanent stations. The fleet is also to be expanded to include e-cargobikes.

As a thank you Frelo will give you a birthday voucher for 30 free minutes on the next trip after redeeming the code 654565.

And which station is the most popular?
The station "StuSie" at the Student housing estate in Betzenhausen leads the ranking in terms of both the number of rentals and returns. Also very popular are the stations at Engelbertstraße, main station, Europaplatz, Berliner Allee and at the student village Vauban.

All that's left to say is:
Keep on biking, and have a good time.

nextbike is European market leader in bike sharing. We like to share and thus mobilise millions of people in a sustainable way. As micro mobility pioneers, we have been developing smart bike sharing schemes since 2004. Currently, we have established bike sharing as an elementary component of urban mobility in over 300 cities worldwide.