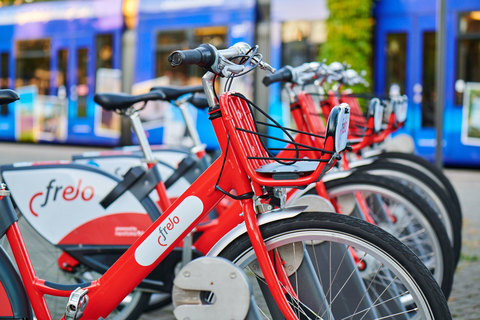 Frelo is booming and will be further expanded! Freiburg has received 17 new Frelo stations with an additional 130 new bicycles in the past weeks.

In selecting the new locations, we were also able to consider some of your wishes. The new stations complement the existing network in the city center and the outer districts and are located close to important bus or tram stops.

The success story of Frelo is ultimately exactly what we and the city hoped for: a step towards a traffic turnaround! Statistically speaking, each Frelo was rented four times on the busiest day, July 31, 2020!

nextbike is European market leader in bike sharing. We like to share and thus mobilise millions of people in a sustainable way. As micro mobility pioneers, we have been developing smart bike sharing schemes since 2004. Currently, we have established bike sharing as an elementary component of urban mobility in over 300 cities worldwide.